This section is not available in your neighbourhood.


Freshly caught by our web of local reporters, SpideyBuzz reports are stories with a uniquely local flavour and feature scoops and information that are difficult to findanywhere else!


Here, do your bit for the environment. You have till May 20 to register

URJA, in collaboration with Haiyya, a Delhi-based NGO, has organised a four-month-long programme called Youth For Environment. The group has invited applications from people in the age group of 18 to 40 from RWAs across the city.

“Our purpose is to provide a platform where people can work for the good of the environment as a group," said Sukhmani Grover, a member of Haiyya and co-coordinator of the campaign. "Currently, there is no such platform at the grass-roots level, where people can collectively work on environmental issues such as garbage, water and pollution.”

Delhi's pollution has reached alarming levels in the past five to six years. "The municipal corporations, the state government and NGOs have taken several measures to control the city’s increasing air-pollution levels over the years," said Ashutosh Dikshit, the president of URJA. "But frankly, they have not been able to improve the situation."

"The reason for their failure is the lack of a proper platform to enable people to make changes at the hyperlocal level," said Dikshit. "Youth For Environment will not only help generate ideas among the youth but also help mount pressure on government agencies to push the envelope when it comes to innovating ways to bring down the city’s pollution levels."

Those interested can apply at act@haiyya.in, or call on 9871446720 by May 20. Registration is free of cost. The selected volunteers will undergo a 20-day training by experts.

“In its first phase, at least 20 to 25 volunteers will be selected and trained. After that, they will work in their respective RWAs. They will create awareness among people of other RWAs and encourage them to work for the good of the environment,” added Grover. Will Gurgaon ever learn! Why in the world is Dwarka contributing to the toxicity? ... This smog is choking me Dwarka: That's smog you see in this picture and silvers aren't amused!

Thank you for participating 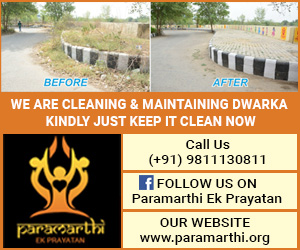